Hidden screen camera, third generation: when we will have phones without perforations or notches

Front cameras were the main reason why mobile manufacturers could not create phones with a flawless front-to-back screen without perforations, notches or “drops”. However, this important minus will be remedied soon, at least in the case of smartphones.

The next step in the evolution of selfie cameras is to hide the cameras behind the screen. According to market speculation, ZTE should launch such a phone today, September 1st. Not much is known about the device or how effective the technology of hiding the camera under the screen is.

The alternative comes from Xiaomi, and the Chinese have been a little more transparent about progress on this issue. Through the video below, a Xiaomi vice president detailed in a video posted on Weibo how the third generation of the solution they found works to hide the camera under the screen. Although the other two generations have not found a place in commercial terminals, but only in prototypes and concepts, the third should end up in a phone before by the end of the year. You can see the clip in question below.

Xiaomi explained how the technology developed in-house works in a separate post on Weibo. In the hidden camera area, the panel will have twice the number of pixels, so that when you use the camera, the accuracy of the information displayed in that region of the panel will not be affected. It borrows the colors from the pixels around the camera and has the ability to turn them off completely, when needed, when taking a picture.

In the end, the results seem quite impressive, and the mechanism implemented by Xiaomi minimizes the nonsense reflections given by the transition of light through the phone screen to the capture sensor. The colors are correct, the resolution is good and there doesn't seem to be any compromise on the quality side. Most likely, the first phones with this technology will be the Xiaomi Mi 11 series. 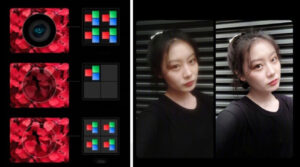 2020-09-01
Previous Post: Detached from the books, the most attractive amusement park will be a chocolate factory
Next Post: Bad news for Dacia: how the crisis has left its mark on the manufacturer