Streaming video games reaches the iPhone and iPad: what rules Apple has imposed

Apple has succumbed to market pressures and decided to allow streaming of video games on iOS. However, the Cupertino giant's new regulations may be too complicated for Google, NVIDIA, Microsoft and others.

Apple's fix on not allowing streaming games on iDevices starts with an explanation as simple as possible. The creators of iPhones and iPads want to make sure that every game or application that can be experienced on the gadgets in the portfolio complies with the Apple AppStore's terms and conditions of use.

Based on this reality, the compromise solution that Apple thought of is simple. Although you will be streaming games, every title that will be available in this format must be “downloaded” from the AppStore. I put it in quotes, because streaming itself involves accessing a cloud gaming experience. I don't know exactly what you could download from the AppStore so that the whole concept is still streaming.

“Games offered through a subscription game streaming service must be downloaded directly from the AppStore, must be created to avoid double payments to the subscription provider, and should not disadvantage non-subscribers.” shows in the new list of terms and conditions imposed by Apple.

Ã¢ â¬ ÅGame streaming services can provide a catalog application in the AppStore to allow users to subscribe to the service and find games in the AppStore, provided that those applications comply with all of Apple's terms and conditions, including the ability for users to pay for subscriptions through in-app purchases and use the Sign in with Apple authentication system. All games included in the catalog application must include a link to an individual product page in the AppStore.Ã¢ â¬ It is also mentioned in the same document.

In any case, Apple accepted the idea only under these conditions. If giants with such services are open to adapting, you'll be able to have services like Google Stage, Microsoft xCloud, and NVIDIA GeForce Now on your iPhone and iPad. 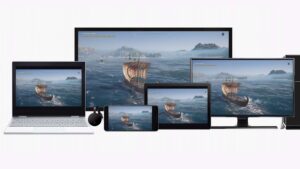 2020-09-14
Previous Post: Screenshots on Mac: How to customize the Screenshot experience
Next Post: The first day of school has also arrived on Google: what appeared on the front page on September 14th